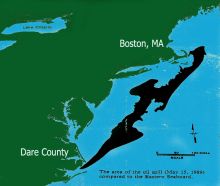 Our local Outer Banks economy will shoulder the risk of damages from drilling offshore while the financial benefits of drilling go to the oil companies who secure the leases. Royalties are also paid to the federal government from oil and gas revenues but are not distributed to the state or local economies. There are no rewards of any kind for local residents of coastal communities but it is the residents and local coastal communities that carry a full burden of the risks of offshore drilling.

The risks are significant and a spill would cost the Outer Banks hundreds of millions of dollars in tourism income, thousands of jobs, and damage fragile fisheries and fragile ecosystems. Damages would not only impact the Outer Banks but currents would likely carry oil and other pollutants upstream (Gulf Stream) and down stream (Labrador Current). It is common knowledge that gulf stream waters are in a dynamic interchange with beaches and estuaries.

The process of exploring for oil is damaging and the pollutants introduced from "non-toxic oilfield waste" is highly toxic and would have a devastating effect on one of the most biologically dense and bio-diverse areas of the world.

The powerful hurricanes that batter our coasts can destroy drilling platforms, underwater pipelines and coastal storage tanks, dumping millions of gallons of oil, as happened with Hurricane Katrina on Sept 1. As documented by SKY Truth  the satellite imagery below show spills flowed unimpeded for several weeks after Hurricane Katrina. Similar activity in the Atlantic would add insult to injury by pouring oil on beaches in addition to the significant property damage that typically accompanies hurricanes.

It is common knowledge that very few local jobs are created through offshore drilling as workers are shipped in from other areas and support infrastructure would be flown in or serviced out of the Chesapeake Bay area.,

Oil Companies already have thousands of leases they are not developing. 80% of the nation?s undeveloped, economically recoverable Outer Continental Shelf (OCS) gas is located in the Central and Western Gulf of Mexico (Mineral Management Service 2004)

Bureau of Land Management (BLM) data indicates that the vast majority of federal lands currently under lease are not being developed. Drilling permit approvals on Western public lands by the BLM increased in 2004 to a record number of 6,052, while the number of new wells that were drilled declined by nearly 10 percent, to 2,702. There is no NEED to drill off North Carolina?s Coast. Oil and gas resources are available to the oil companies , but they are not developing the leases they have.

It is also understood that Oil Companies sell the resources in the most favorable markets which will not likely be the US markets.

We assert that drilling should not be considered off North Carolina. In 1990, after Congress passed the North Carolina Outer Banks Protection Act, prohibiting leasing and drilling on federal seabed offshore from North Carolina Mobile Oil abandoned their leases.

In the Outer Banks Protection Act Congress found in 1990 that: (1) the Outer Banks of North Carolina is an area of exceptional environmental fragility and beauty; (2) the annual economic benefits of commercial and recreational fishing activities to North Carolina, which could be adversely affected by oil or gas development offshore the State's coast, exceeds $1,000,000,000; (3) the major industry in coastal North Carolina is tourism, which is subject to potentially significant disruption by offshore oil or gas development;

Mobil was denied a permit to explore for oil or gas off the coast of North Carolina. We are also aware that Chevron abandoned their leases off North Carolina in 1998.

Drilling in Hurricane & Storm plagued waters, has proven to be disastrous.

North Carolina is being pressured to put its vibrant economy at risk when nothing is being done on a national scale to conserve resources.

We strongly oppose drilling in the waters off North Carolina or anywhere else off the east coast of the US.
Michael McOwen, Past President of LegaSea